Early in 1938 while working with RKO, Lucille Ball first appeared with Jack Haley (the Tin Man from "The Wizard of Oz") in his weekly radio program, The Wonder Show sponsored by Wonder Bread. The show was also hosted by Lucy's good friend, Gale Gordon. This lead to a featured spot on Phil Baker's Hollywood radio show, where Lucy worked with some wonderful comics and learned to rely on timing and tone of voice for comic effects.

Ten years later, Lucy would find herself with her own Radio Series. While producing films for Columbia Pictures, CBS offered Lucy a Radio show based upon the book, Mr. and Mrs. Cugat by Isabelle Scott Rorick. Lucy was interested, especially if husband, Desi Arnaz could costar, but the big brass at CBS thought he was not the type to play a typical American husband. CBS turned a deaf ear to her proposal and she was teamed with Richard Denning in My Favorite Husband.

This half-hour weekly show revolved around the travails of Liz and George Cugat, a very normal, middle-class couple from Minneapolis. "Two people who live together, and like it." Liz is a dizzy, scheming wife who gets into relatively minor but vexing scrapes that makes life challenging for her long-suffering husband, a banker played by Richard Denning. Gale Gordon was the bank president, the same role that was to be his on The Lucy Show. The characters of Liz and George Cugat soon had their names changed to Liz and George Cooper.

Lucy found radio a wonderful way to make a lot of extra money. She would be on the movie set during the day and at night rehearse the script and tape the show.

Her writers for the show were Madelyn Pugh and Bob Carroll, Jr. and the producer-director was Jess Oppenheimer, a connection that would become particularly fruitful in the years to come. In addition to taking charge, Jess Oppenheimer gradually began to revamp the program. He also reworked Lucy's role into a daffier, broader character, much closer to the Lucy Ricardo who would soon appear on television.

The show was performed in front of a live studio audience, not just actors in front of microphones reading their lines. The performers were in costume as well and it was much like theater. It provided Lucy with her first regular gig that involved feedback from a live audience. She found the experience exhilarating as did the audience.

Something magical happened when Lucille Ball began to work in front of them and she began hitting performance levels that were missing from any of her previous film work. She absolutely bloomed in front of an audience.

With the success of My Favorite Husband, CBS began talking about taking the show to television. Lucy saw the possibility of a television series as an opportunity to not only take her radio success to another level, but as an ideal way to mesh career and marriage into one by working with Desi on the same show.

Lucy refused to do the show without Desi, which was a major stumbling block for CBS. In order to get CBS to agree and as a way to promote themselves Lucy and Desi formed a partnership, launching Desilu Productions in the Spring of 1950. They took their vaudeville act on the road, which eventually became the Pilot for the I Love Lucy show featuring Pepito Perez, the renowned Spanish clown.

NBC became interested in the two and thought they made an attractive package, with Lucille's film and radio career and Ricky's nightclub and recording contract with RCA. CBS had no other offer except to accept the two and abruptly okayed the television sitcom that Lucy wanted with Desi portraying her husband. With that, one of the greatest sitcoms of all time had been formed.

In 1964, Lucy returned to radio as herself in "Let's Talk to Lucy"; "for a very specific reason. Lucy wanted to talk as Lucille Ball rather than as her character." This radio show went on for about a year during the third season of The Lucy Show. Lucille spoke and interviewed many stars. Several episodes can be heard on Lucille Ball's show's DVD releases.

The world will never be without Lucy. She was not merely an actress or a comedian. She was "Lucy" and she was loved. 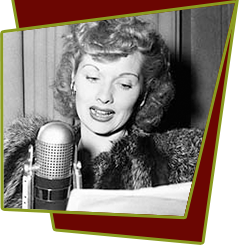