Back in New York City with a new determination, Lucille Ball landed her first modeling job in a small wholesale coat place on Seventh Avenue. She went by the name of Diane Belmont. The Belmont racetrack on Long Island inspired her name.

Soon Lucy moved into an atmosphere of gilded elegance. She became a model at Hattie Carnegie's internationally famous dress shop on East Forty-Ninth Street. Overnight, she found herself in a world of rich society women, glamorous movie stars, and free-spending men-about-town.

Lucy learned to look and move with elegance and grace. Watching all the society women, Lucy analyzed their styles, how they walked, moved, and what they wore and how they talked. Connie and Joan Bennett were frequent customers and this was the time Lucy decided to bleach her hair the color of Joan's platinum blonde. She began to cram a stockpile of information that would serve her well in the coming years.

Lucy began to meet some of the rich eligible bachelors in town and had many proposals but, at eighteen, marriage was the last thing on her mind. Getting little sleep and not eating right, she came down with pneumonia but needing the money, she hurried back to Hattie's. It was at this time, while standing for a fitting that she felt excruciating pain in both legs. Hattie sent her to the doctor, and Lucy found out she had rheumatoid arthritis.

After some initial treatments, a discouraged Lucy returned home to Jamestown. While recuperating in Jamestown, Lucy was approached to play Aggie Lynch in the fast-paced melodrama Within the Law for the Jamestown Players. She was hailed a success, a true professional. With these words, Lucy persuaded her friend, Marion Strong, to return to New York City with her the following Spring.

Lucy returned to Modeling for a first-class clothing house, Jacksons on Thirty-Ninth Street and Seventh Avenue. The clothes were exquisite and expensive but the women were department store buyers, full of talk and gossip. Lucy clowned around a lot and made them laugh, which helped their sales!

To earn more money, Lucy posed at night and weekends for commercial illustrators. One evening, a painter named Ratterman did an oil portrait of Lucy in a borrowed chiffon dress from her modeling job. He sold the painting to Chesterfield cigarettes and overnight, Lucy's face and figure were on billboards all over town.

As the new Chesterfield Girl, Lucy found the break she needed. Sylvia Hahlo, a theatrical agent noticed her and told her Sam Goldwyn needed a dozen well-known poster girls for a new Eddie Cantor movie, "Roman Scandals". He had all the girls picked, but one had backed out. Within three days, Lucy was on her way to Hollywood! 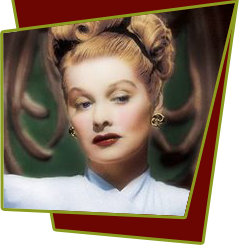