It started in Jamestown. Laughter was a commodity hard to come by in Lucille Ball's childhood. Her father, Henry Ball, died of typhoid fever when she was only four years old. Her mother, DeDe Hunt, married Ed Peterson four years after her husband's death.

When the family moved to Detroit, Lucy stayed behind with Ed's parents. Strict, sour and cheerless, the Peterson's melt out frequent and unreasonable punishments. According to them, nothing in this life was to be enjoyed, only endured. It was at this time Lucy learned to live in her imagination, and to step inside other people's skins, indispensable abilities for an actress.

Eventually, when her mother returned, her Grandfather Hunt bought them a place in the country so that they could be a family again. It was during this time when her Grandfather Hunt took her to vaudeville on Saturday nights that Lucy knew that she wanted to make people laugh. She would stage plays at home with her family as cast, crew and audience. In High School, she staged an amateur production of Charley's Aunt. The success of that show encouraged Lucy to get into as many musical and dramatic offerings as possible.

Lucy soon quit High School and with DeDe's help, headed off to New York City where she was enrolled at the John Murrary Anderson-Robert Milton Dramatics School. But in short order, they discovered that she couldn't sing, dance or control her body or voice properly. Student's and teachers both ignored her. Another student, a short, dynamic blonde, projecting great verve earned raves for everything she did. It was this student, Bette Davis, who went on to confirm the school's belief in her awe-inspiring abilities.

To prove the school wrong and not wanting to return to Jamestown, Lucy decided to become a showgirl. She found work in various musicals, such as rear-line chorus girl in the third road company of Rio Rita, a Ziegfield production and Stepping Stones, a Fred and Paula Stone show.

Lucy often found herself broke and homesick during this time. When she couldn't stand it anymore she packed up and went back to Jamestown. While back in Jamestown, working various jobs as a clerk in a dress shop or as a Walgreen's soda jerk, she knew she had to go back to New York City. This time her luck improved. 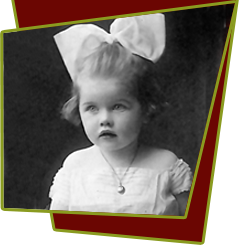