Lucille Ball's TV Career started shortly after her radio comedy series in 1951 with I Love Lucy. She remained the top comedian for more then the next 3 decades on television.

Even today, Lucille Ball remains America's most popular TV comedienne, known for her henna red hair and slapstick comedy routines. She starred in five different TV shows during her career; the original, I Love Lucy (1951-57), became one of the great TV landmarks of the 1950s and continues today on TV across the world.

The Lucille Ball-Desi Arnaz Show, known in reruns as The Lucy-Desi Comedy Hour (1957-60) followed the I Love Lucy format in an hour-long show format.  After Lucy's divorce from Desi Arnaz, she went on with her friend, Vivian Vance to star in The Lucy Show (1962-68). Afterwards, she continued with her children in Here's Lucy (1968-1974).

Although it seemed she would retire from TV Comedy series, she came back briefly in 1986 with Life With Lucy. Lucy may be gone now, but she will continue to be with us as long as we have television! 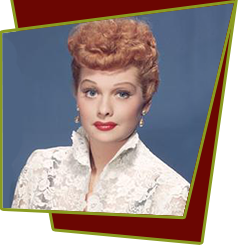