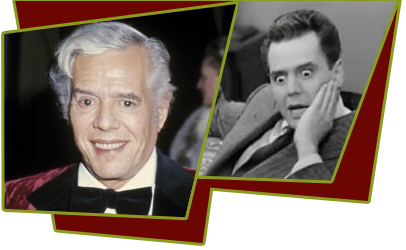 Desidario Alberto Arnaz ye de Acha the Third was born in Santiago, Cuba on March 2, 1917. His father was the mayor of Santiago. The 1933 Batista revolution had landed his father in jail and as well stripped Desi's family of wealth, property and power. His father was released mostly because the U.S. officials believed him to be neutral during the revolt. The family fled to Miami, Florida.

One of Desi's first jobs in America consisted of cleaning canary cages. However, after forming his own small band of musicians, he was hired by Xavier Cugat, the "king of Latin music. Desi soon left Cugat, and formed his own Latin band and literally launched the conga craze in America.

Desi was cast in the Broadway play "Too Many Girls, " which as well brought Desi to Hollywood to make the film version of the play. It was on the set of "Too Many Girls" that Desi and Lucille Ball met. They were married on November 30th, 1940 and approximately ten years later they formed Desilu Productions and soon began I Love Lucy.

At the end of the I Love Lucy which included The Lucy and Desi Comedy Hour, the two divorced on May 4, 1960. He returned to his music, breeding horses at his new ranch, and developed TV projects.

Desi later married Edith Mack Hirsh on March 2, 1963, who died in 1985. After struggling with alcohol problems, Desi only returned briefly in 1982 in a starring role in "The Escape Artist". He later wrote an autobiography entitled "A Book."

A heavy smoker, Desi was diagnosed with lung cancer in 1986, and died a few months later on December 2, 1986 in the arms of his daughter, Lucie Arnaz. He was cremated and his ashes scattered.

Cause of death:
Lung Cancer