(Known as The Lost Episode) 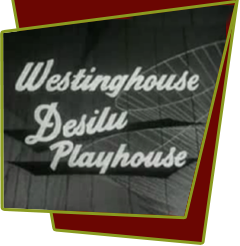 Also known as "The Lost Lucy-Desi Christmas Special". On Christmas Day, 1959, The Desilu Playhouse (1958-1960) presented a special Christmas broadcast starring the whole I Love Lucy gang, in addition to the Desilu Players and numerous stars of other popular Desilu productions.

The wrap-around plot has Hollywood gossip queen Hedda Hopper interviewing Lucy and Desi about the Desilu Players and the show they recently staged. This leads to flashbacks of Lucy (who is directing the stage show) making chaos backstage between the musical numbers.

The Desilu Christmas special was produced and (essentially) directed by Lucille Ball herself. This is the only Desilu production that features the I Love Lucy cast members playing themselves.

Special Notes: This is one of the last shows Lucy and Desi did together, a Christmas special that had never been re-broadcast until it resurfaced in 2014. This program is significant because it's one of the last appearances of the four I Love Lucy cast members together, Lucy and Desi filed for divorce just a few months after this special was filmed. They only did one more Lucy/Desi program together before ending The Lucille Ball Desi Arnaz Show (The Lucy-Desi Comedy Hour in reruns) and never again performing together on another TV show.

The Desilu Players was a pet project of Lucille Ball's, who hand-picked each of the versatile performers as her protégés (they actually were appearing in a stage revue that she produced around the time of this broadcast). The musical and comedy numbers from the live show were filmed almost exactly as originally staged, but only the musical numbers ended up in the Christmas special's final edit.

Music:
"I'm Only Happy When I'm Singin' the Blues" sung by Carole Cook and Dick Kallman among others