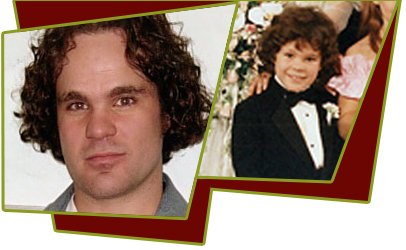 Philip J. Amelio, at age 9 played Lucille Ball's young grandson, Kevin McGibbon on Life with Lucy. Amelio was born in Sharon, Connecticut and grew up in nearby Pine Plains, New York. Philip's younger sister, Lindsey Cook Amelio, also appeared on television, including three TV movies, and as spokesperson for 9Lives cat food, with Morris the Cat. At one point during their careers, both siblings' faces were on every major network in one form or another.

In addition to 1986's Life With Lucy, Amelio's career included a three-year run (1988–1991) on the daytime soap opera, All My Children, and a long string of commercials. He started acting at age four, when he was cast for a Pepperidge Farm commercial. This led to campaigns for Ford Motors, All laundry detergent, and Shake 'N' Bake bread crumbs. Amelio was the first spokesperson for Jell-O Pudding Snacks.

On All My Children, Amelio played Scott Chandler, the son of Cindy Chandler, who succumbed to AIDS on the show. Amelio officially retired from show business at age 13 and concentrated on being a "normal teenager" and student.

Philip's love of language and history led him to study to be a teacher. He was graduated from State University of New York in Albany, and received a Masters Degree in Education at The College at St. Rose, also in Albany. For the last two years of his life, Amelio was employed at Duanesburg High School in Delanson, New York as a full-time teacher and Modified Baseball Coach.

Philip also excelled at baseball and coaching. Throughout the years, he was the pitching coach for the Pine Plains (NY) Junior League, and was the modified baseball coach at Duanesburg High School. In addition, he helped coach and teach dozens of players in the Pine Plains School District in numerous clinics and summer leagues - often with his father, Philip Sr. Together they coached many of the players on the 2002 New York State Championship Baseball Team.

The school in which Philip taught named an accredited English course after him, incorporating into the curriculum some of his own poetry and short stories as well as the literature he liked to read and teach. The school in Pine Plains, NY dedicated a new flag pole and monument in his name as a 'thank you' for all he did for boys in the area (teaching them the finer art of baseball).

In March 2005, after complaining of a sore back, Amelio was diagnosed with a bacterial infection of the heart valve. He deteriorated rapidly and died on 1 April 2005, at age 27, from an infection in Boston, Massachusetts. In his memory, Amelio's father established the Philip J. Amelio, II. Scholarship Fund, offered to impoverished schoolchildren who reside in the Pine Plains Central School District and the Duanesburg Central School District, to help them maintain their education.

Phil Sr. attributes his son's sudden death to a tragic misdiagnosis. "Philip was healthy as a horse all of his life. The beginning of March, while he was attending a coaches' clinic at Cooperstown, he had a pain in his back. The doctors thought it was just a herniated disc or syatica. No one thought to give him a blood test. If they had, they would have discovered the pain was caused by a bacterial infection that had lodged on his heart valve and started to grow. He fought with all his strength, but died on April 1."

"Philip's experiences in show business resulted in him being a good teacher. Show business taught him so much about responsibility, dedication, and confidence. Even though it was 19 years ago, we always enjoyed telling people about the terrific experience we had doing Life with Lucy. Even though the show was cancelled and we heard some awful comments about it, we were always proud to tell everyone about how Lucy loved Philip."