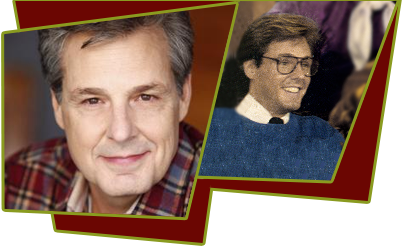 Larry Anderson has had a number of turns at bat as a game show host. However, the one distinction no one will ever take away from him as Lucille Ball's only TV son-in-law in Life With Lucy.

Anderson, who has been featured heavily in his successful Jawdroppers infomercial in recent years, emceed the 50th anniversary I Love Lucy banquet and stage show at the Loving Lucy 2001 convention in Burbank, California. He also directed the Ultimate Lucy Game Show, a format he co-created.

Reflecting back on Life with Lucy, the 1986 ABC sitcom canceled after only eight episodes, Anderson was philosophical. "How could it be anything but a disappointment?" said Anderson after the Lucy game show. "I know from talking with her, in the back of her mind, she was quite afraid of this. She didn't have to do it. She had nothing to prove. But some people were very persuasive to get her back to television. For my part, I'm thrilled I had the time I did to work with her."

He originally started as an assistant to magician Mark Wilson in 1973, and was immediately put to work on the set of The Magician (starring Bill Bixby), assisting Wilson as the show's magic coordinator. He has since appeared in several television series and films, and is also known for his uncredited role as Michael Long in the (pilot episode) of the 1980s hit TV series Knight Rider. His voice was overdubbed by David Hasselhoff who, when the character was shot in the face and given plastic surgery, took over the role for the remainder of the series.

Anderson's other TV roles include The Six Million Dollar Man and The Amazing Spider-Man (both in 1977); the short lived 1979 TV series Brothers and Sisters; and the soap opera, Days of Our Lives in 1987, appearing as James Dixon. He also hosted three game shows, the first being a revival of Truth or Consequences in 1987, The Big Spin from 1995–1996, and Trivia Track on GSN for a few months. He has made guest appearances on TV shows including Happy Days, The A-Team, Mork & Mindy, Matlock, and The O.C.. Anderson also portrayed Ronald McDonaldin at least one TV commercial for McDonald's

Anderson hosts a weekly quiz radio show on Shokus Internet Radio created by game show producer Ron Greenberg titled Anyone Can Play... But Don't Call Us, We'll Call You! He also developed the JawDroppers DVD Collection, a beginner-intermediate level instructional magic series (5 volume set) shot from two perspectives, as the person being entertained and as the entertainer.