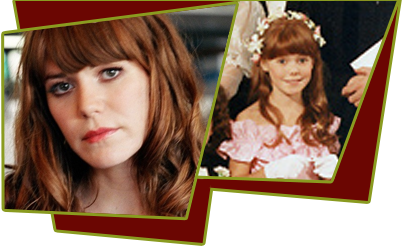 Jenny Lewis, who played Becky in the ill-fated Life With Lucy series, made her debut in a Jello commercial, then starred as a child in a number of films during the 1980s. In 1999, she formed the indie rock band Rilo Kiley along with her friends Pierre De Reeder, Blake Sennett and Dave Rock. She also provided background vocals for Give Up, the debut album of The Postal Service.

The former actress counts roles in movies like Shelley Long's "Troop Beverly Hills" and the bad-girl epic "Foxfire" (which featured future Oscar-winner Angelina Jolie). Besides appearing in Life With Lucy her appearances on TV include "Growing Pains" and "Rosanne" as well as in the episode 'If She Dies' on "The Twilight Zone" in 1985.

Appearing in Life With Lucy where she played Lucille Ball's granddaughter, Jenny Lewis said "Yes, Lucy was a bit rough around the edges, and yes, she constantly smoked cigarettes on the set. She would pull her face back with tape, sort of like a cheap face-lift."

These days, Jenny wants to be known as a singer/songwriter, not as a burgeoning starlet. She began writing music with ex-child actor Blake Sennett (of Nickelodeon's 'Salute Your Shorts' fame) eight years ago, eventually forming a band that played around the Southern California area

Their first CD was the critically acclaimed Take Offs and Landings, released in September 2001 by Seattle's Barsuk Records. Featuring Lewis, Sennett, bassist Pierre de Reeder and drummer Dave Rock (who has since been replaced by Jason Boesel), the home-made recording fit nicely next to music by label mates Death Cab for Cutie, who often shared the stage with the band.

It wasn't until they were out touring Take Offs, that the Los Angeles natives began a relationship with Saddle Creek Records.

She equated her TV debut on Late Night with Conan O'Brien (October 6, 2004) to the being naked in a school dream. "It's your first TV appearance and you're naked, and Conan O'Brien is there and he's so much taller than you. And you feel short and sad, because you're naked and short."