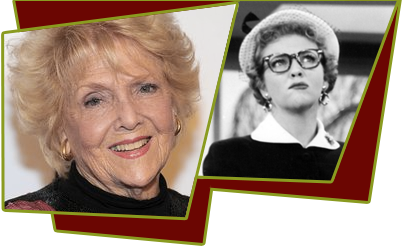 Born in Brooklyn, NY in 1919, Dorthea Singleton was one of the busiest actresses in radio and television history and had been active in show business since the 1940s. Her distinctive speaking voice made her a radio favorite. Her association with Lucille Ball began on radio in July of 1948, when she made many appearances with Lucille Ball on radio's My Favorite Husband.

Before plunging into radio acting, Ms. Singleton was a dancer in New York's Ballet Theatre Company for three seasons, and had her own singing radio show on WNEW, also playing theatres as a singer with Art Jarrett's big band orchestra. Her distinctive voice led to a career in radio, where she was an actress on "The Whistler" and other shows during WWII, performing at times with the likes of George Burns & Gracie Allens, Bob Hope and Jack Benny.

Television soon beckoned, and Doris' pretty face and trim figure made her a frequent visitor on television. After meeting Lucille Ball, she was invited to join the cast of I Love Lucy as Carolyn Appleby. Singleton appeared on 10 episodes of the show from 1953 to 1957. She also returned to work with Lucy on episodes of The Lucy Show and Here's Lucy as well as the 1980 Lucy Special, Lucy Moves to NBC.

Singleton also appeared in a few feature films during the 1950s: "Terror at Midnight", "Affair in Reno" and "Voice in the Mirror".

She was a regular on three series, I Love Lucy, The Great Gildersleeve, and on the brief 1960 series, Angel. She also recurred on "My Three Sons" as Margaret Williams. Doris is also remembered for her TV guest appearances, gracing such classics as The Jack Benny Show, Perry Mason, The Adventures of Superman, Mr. Lucky, The Loretta Young Show, The Dick Van Dyke Show, The Jimmy Durante Show, The Munsters, Hogan's Heroes, and Gomer Pyle, U.S.M.C. during the 60s; and she made appearances on dramas including Gunsmoke, Twilight Zone, The Fugitive and The F.B.I.

Her credits during the 1970s included All in the Family, Marcus Welby, M.D., Phyllis and the daytime soap Days of Our Lives. Singleton made one of her last appearances in a 1982 episode of Dynasty. She also appeared as an interviewee in the American Masters documentary Finding Lucy in 2000 and in an "E! True Hollywood Story" episode devoted to I Love Lucy in 2005.

She will always be remembered as Lucy Ricardo's friend and nemesis Caroline Appleby on I Love Lucy. She resided in Los Angeles with her husband Charles Issacs, a comedy writer, director and producer who died in 2002 to whom she was married for 61 years.

She died in Los Angeles in 2012, aged 92, from complications of cancer. She is interred in Forest Lawn Memorial Park (Hollywood Hills) in Los Angeles.

Cause of death:
Cancer