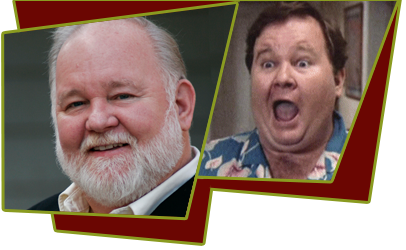 Donovan Scott played M&B Hardware Store's employee, Leonard Stoner, in the ill-fated Life With Lucy series. He is also known for his role of cadet Leslie Barbara in the 1984 film Police Academy starring together with Steve Guttenberg. He also appeared in the music video for Olivia Newton-John's 1981 hit "Physical".

Donovan Scott was born in California on 29 September 1947 and studied for two-and-a-half years at the American Conservatory Theater. He toured as an actor and, later, artistic director of a troupe before settling in Los Angeles in 1977. He has since acted for film and television appearing in such films as 1941 (Steven Spielberg, 1979), Police Academy, (Hugh Wilson, 1984), Back To The Future (Robert Zemeckis, 1985), Jingle All The Way (Bryan Levant, 1996), Popeye, Savannah Smiles, Zorro and The Gay Blade, Sheena, and Splash Too. He came to directing on the 13-part series The Gold Rush for Artur Brauner's CCC Television after the original director James Hill fell ill. He was then hired by Brauner to direct The Children Of Captain Grant (1996) in which he also appeared as an actor.

In Russia, he starred in mini-series, The Alaska Kid, based on Jack London's 1912 short story anthology, Smoke Bellew. He also starred in films as well as directing two films and one of the mini-series which he co-wrote. Donovan taught Comedy, Improv. and Mime for 5 years in Northern California as well as being invited as a Guest Teacher in schools and universities throughout the North East. In 1997, he was the director and teacher of his L.A. Improv Company, Brew Ha Ha in Los Angeles. Recently he has been teaching the Improv, Intro Acting and Scene Study workshops for Carolyne Barry. He has also been an invited Guest Instructor in schools and universities throughout the U.S. and most recently, at Stella Adler's Studio, in Hollywood.