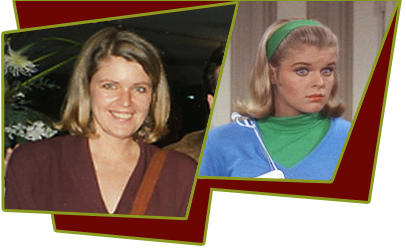 Best known for playing Chris Carmichael, Lucille Ball's daughter during the first format of The Lucy Show. Candy Moore was born Candace Lee Klaasen in Maplewood, New Jersey. Prior to The Lucy Show she played Tommy Jo in the movie, "Tomboy and the Champ" (1961). Her other movie roles were "The Night of the Grizzly" (1966), "Raging Bull" (1980), and "Lunch Wagon" (1980).

Her likeness was painted by Alberto Vargas for The Cars album Candy-O, from a photo shoot Moore had done for Ferrari.

After The Lucy Show changed formats, Candy appeared on "The Donna Reed Show" in 1965. She later married actor, Paul Gleason and divorced several years later. Gleason is an American film and television actor, known for his roles on television series such as All My Children and films such as The Breakfast Club, Trading Places, and Die Hard. He died in May 2006 of Lung Cancer. They had a daughter together.

Moore is now living in Beverly Hills and is currently a Journalist and Author and is teaching English in the East Los Angeles Performing Arts Academy Magnet at Esteban E. Torres High School.