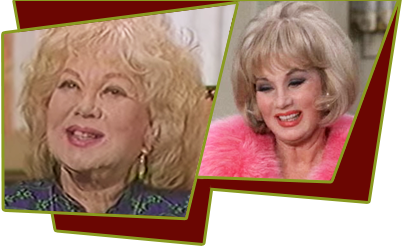 Ann Sothern was born Harriette Lake in Valley City, North Dakota. She became one of Broadway's leading ladies and a star of the motion picture world. Lucille Ball fans remember her best for her role as Susie MacNamara in 'Lucy Takes A Cruise To Havana,' the first installment of The Lucy-Desi Comedy Hour. In 1959, Lucille Ball made a guest appearance on Sothern's CBS series, The Ann Sothern Show. Later, in 1965, Ann returned the favor when she accepted the recurring role as Lucy Carmichael's old college roommate, Rosie Harrigan (Countess Framboise) on The Lucy Show.

Ann Sothern's film career started as an extra in 1927. For the comedy roles she would play, Ann bleached her red hair blond. After working at MGM and on Broadway, Ann was signed by Columbia for the 1934 film 'Let's Fall in Love'. It was also the year that she would work with Eddie Cantor in his hit movie 'Kid Millions'. For the next two years, Ann would appear in a number of 'B' movies until she was dropped by Columbia in 1936. She then went to RKO, where the quality of films did not improve. She appeared in a series of 'B' movies with Gene Raymond, but her career was going nowhere. In 1938, she left RKO and played the tart in 'Trade Winds', which got her a contract at MGM. In a film originally intended for Jean Harlow, Ann became Maisie in 'Maisie (1939)'. This became a series of movies about an energetic brassy showgirl that ran until 1947. Ann also appeared in well received features such as 'Brother Orchid (1940)', 'Cry Havoc (1943)' and'A Letter to Three Wives (1949)'. After 1950, the roles vanished and she turned to Television as the meddlesome Susie in the 1953 series "Private Secretary". This series was cancelled in 1957 and she came back in "The Ann Sothern Show" which ran from 1958 to 1961. In 1965, she would be the voice of the 1928 Porter in "My Mother the Car". While the 70's and 80's were relatively quiet for Ann, she would be nominated for Academy Award for her role as the neighbor of Lillian Gish and Bette Davis in 'The Whales of August (1987)'.

Cause of death:
Heart Failure